For many of us, Thanksgiving is one of our favorite holidays because it is a chance to spend time with family and friends over wonderful food. As we give thanks for this time, there is an opportunity to take the spirit of Thanksgiving beyond the holidays. When we really step back and think about it, we can be grateful for much more than we probably are.

The World Is Doing Better Than We Think

After recently finishing Harvard psychologist Steven Pinker’s outstanding book, Enlightenment Now: The Case for Reason, Science, Humanism, and Progress, I’ve been given a boost of optimism and gratitude that I didn’t even realize I’d been missing. With all the negative news that we keep reading, it is easy for pessimism to creep in.

Through our phones and social media, we are bombarded with a constant stream of news about racism, poverty, injustice, corruption, homicide, terrorism, and torture. The list is endless, just like the news about it. It can feel overwhelming. We end up focusing on these stories, and we lose sight of the bigger picture.

In his book, Dr. Pinker cites this wonderful quote, which appears to have originated from journalist Franklin P. Jones in 1953, “Nothing is more responsible for the good old days than a bad memory.” While there are real problems in the world, and some of them are quite daunting (e.g., global climate change, the threat of nuclear war), in general, life used to be much worse.

Pretty much every metric of human well-being has improved significantly over time, particularly since the Age of Enlightenment and the Industrial Revolution. As just one example, in the 20th century alone, 300-500 million people died of smallpox. Now that disease has been eradicated. Some other wonderful news about human progress: 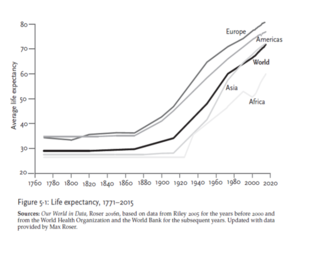 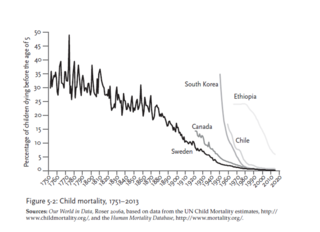 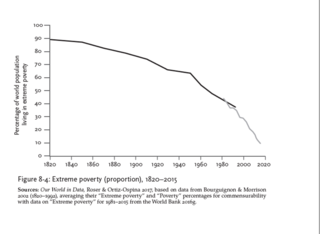 The rate of those living in extreme poverty has gone down from 90% to 10% in 200 years.Source: ExtremePoverty/OurWorldinData

The list goes on (check out the various graphs on Our World in Data):

Even when we look at the current tribalism and division within the U.S., it has been worse. Recall that over 620,000 Americans died in the Civil War. No doubt, our tribalism was way worse back then.

Things Are Pretty Awesome… and We Can Improve

What most of us tend to do, and the news media preys on this negativity bias, is that we focus on the negatives of this world at the expense of our progress. What we lose are perspective and context. So, yes, there is much that can still be done to improve the world. There are many legitimate problems and (notice I say “and” not “but”) things used to be way worse. These two ideas can co-exist: The world is pretty awesome, and there is much room for improvement.

Where Does Gratitude Fit In?

If you could pick out a time in history to live, now would be the best time. Trust me, you don’t want to live in an era in which we had no vaccines. Most of us are blissfully unaware of how brutal and cruel the world used to be. I mean, let’s cut ourselves some slack—we didn’t live in those brutal times, so how could we really know?

Yes, many horrible things still occur now, but not to the same degree that they used to. Since you are reading this, you probably benefit from modernity in the same ways that I do. Thus, we should be grateful (or, we can say “thankful,” for Thanksgiving time) that we live in a world with:

Gratitude is not just for Thanksgiving! We can all capitalize more on the benefits of being grateful. A body of research supports that the people who practice gratitude tend to be happier and less depressed than those who don’t. Each day, we can find things (even small ones!) for which to be grateful:

We are not sweeping our problems under the rug. Yes, those exist, along with some formidable societal problems. But over-focusing on problems can bring us down and sap us of the very energy and resolve that we need to address them!

Some other tips on bringing more gratitude to your life:

You have to be careful with this one, but sometimes I think of bad things that are not happening to me right now (or catastrophes that I was able to avoid in my past narrowly). Off the top of my head, I can think of about a half a dozen ways that I could have been killed or seriously injured in my past, but I was lucky enough to avoid.

Had any of those tragedies befallen me, assuming I’d survived, I would have thought, “Gosh, if only I had avoided that disaster, my life would be better right now.” Now I think, “My wish has come true—I did avoid that awful thing! Yay!”

If we really step back and think about it, we have much for which to be thankful. If we make this a daily practice, beyond just Thanksgiving, our lives will be richer for it. Enjoy Thanksgiving, and let it kickstart a practice of gratitude that you can take with you wherever you go.